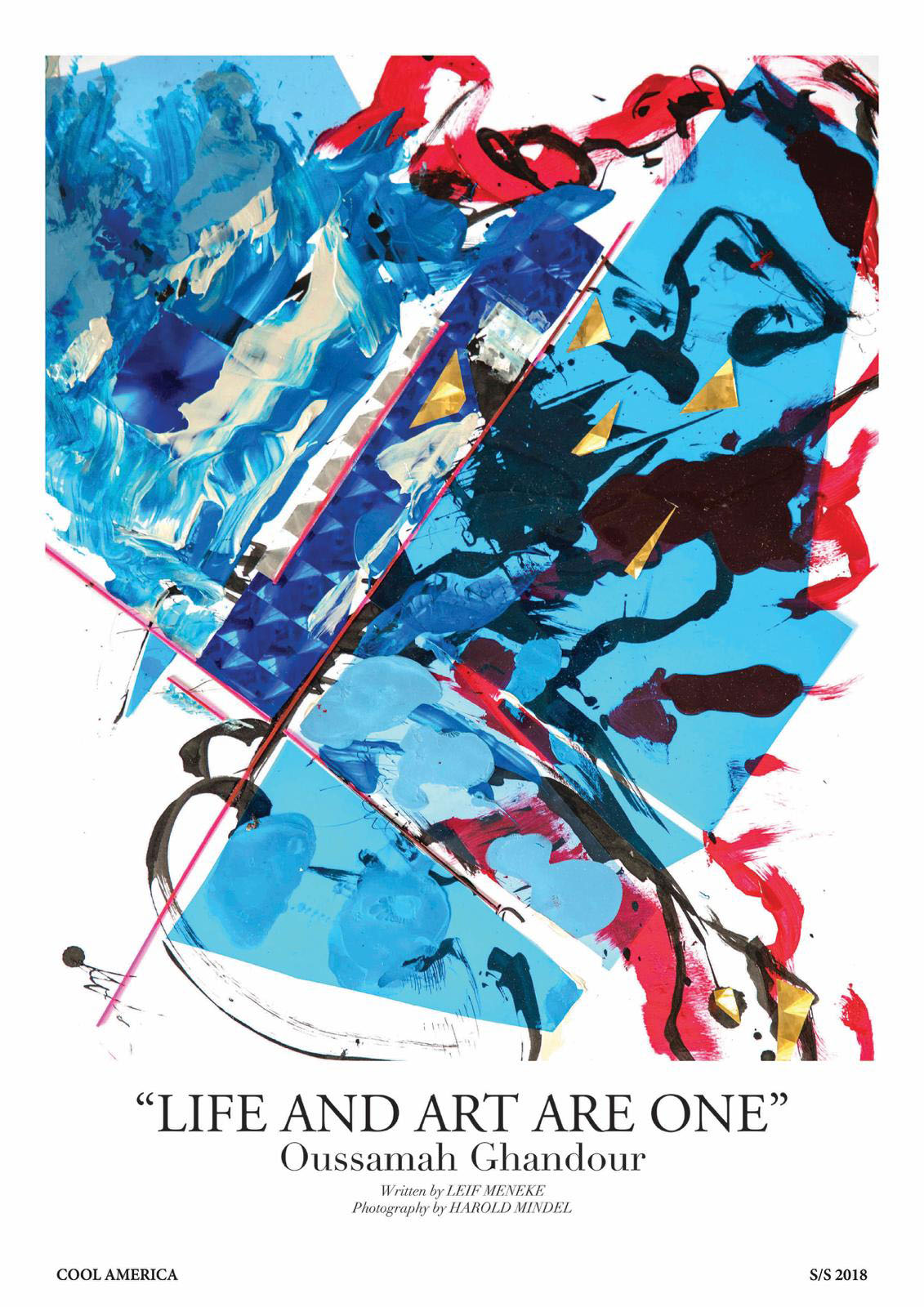 Art and Life are One

“l came to painting through love,” abstract painter Oussamah Ghandour confides in me one recent sunny and brisk spring afternoon. When he was four in Lebanon he fell in love with a girl, “But my family left the country because of the civil war. “That might have been the end of the  story, except Oussamah returned to Lebanon as an adult.

“We again and fell in love.” he says examining acrylic speckled hands.” She was my muse.

Although that relationship ended. it was then that his commitment to painting blossomed. Today. the man and artist is finding success in life and art in New York City.

Leif: Tell me about your early life in Lebanon.

Oussamah: I was born in Lebanon and I was there for the first five to six years of my life. You never knew what going to happen, where a bomb was going to hit. We had army troops downstairs under my building all the time. At one point had to go into caves until things subsided. I was young and found that very intriguing. But to my family it was chaos.

Leif: What was intriguing about growing up in a civil war?

Oussamah: There was much activity: Army guys were so cool, they were so well  put together.

At the same time you could sec AK-47’s on their shoulders, which was super scary. But I had toy [soldiers] growing up, so it was like a game  and as kids we could do anything we wanted to do because it was chaotic. We’d be running around, throwing things and being fuckups.

Leif: You were being children

Oussamah: Yes. We had certain zones where our parents would let us go, but we would always go

little bit further, We grew up fast. I had friends who lived in Beirut during the war and they really got into a twisted mind frame and at same time these people are some of the strongest people.

Leif: Your family left Lebanon when you were five?

Oussamah: Yes. After Beirut we went to Doha. Qatar for a year, then Saudi Arabia. Nice in the

South Of France and from there we made our move to Toronto Canada.

Leif: How has Lebanon influenced your work?

Oussamah: I’ve always romanticised Lebanon. The way that it is constructed. it’s raw nature, its chaos at the same time there is so much heart there. But it’s almost like you have to deconstruct  whatever you see, the facade, the people [to] get the essence of the city.

Leif: You work with materials from your environment.

Oussamah: I start taking from whatever is surrounding me. In New York there’s a lot of the industrials, the rust dripping down the subway walls. Over time I start seeing things as if they are moving, as if the city is painting it itself. I try to document these things as truthful as can.

Leif: Is your work a documentation of your experience?

Oussumah: Yes. I document these little idiosyncrasies of things or abstractions of a situation that is completely negated or lost by someone who’s not looking ‘for it. I like foreign countries because if I don’t understand the language ‘the story becomes more imaginative, Then I translate that into Paintings.

Leif: What have you learned about environments?

Oussamah: Sometimes I have to let go and allow the mediums, the weather and whatever is surrounding me to grow. It’s not in my control.

Leif: What have you learned form your process?

Oussamah: You have to trust the process. It is the most important thing you can do. My instincts have kept me alive so far, so I trust them. The more I’m out of the studio, the more I start having those insecurities where I don’t trust myself anymore and I become weaker as a person.

Leif: What are you working on now?

Oussamah: I’m documenting the ongoing evolution or New York’s real street art. Pieces of the city that may look eroded, broken down, polluted are in fact some of the most interesting works created by the entire population of the city, like a collaborative project without anyone knowing.