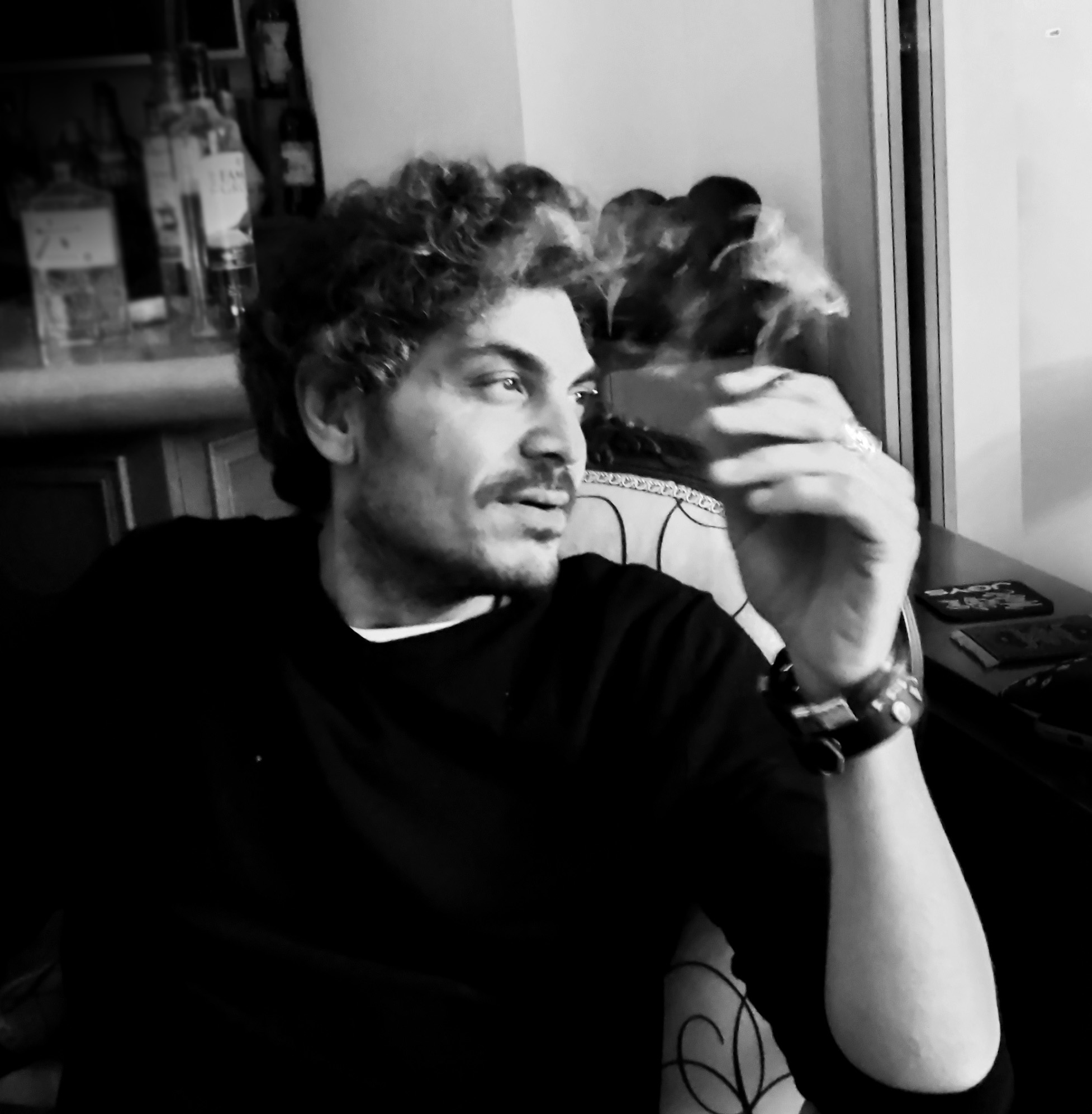 Coming into close proximity to a painting by the young contemporary abstract artist Oussamah Ghandour is akin only to entering an alternate universe; one that mirrors ours, but one considerably more alive and present with music, dance, poetry, and complete magic. It is a world where darkness and light don’t just, but must, always merge; to create an indescribable out of body experience – a universal language perhaps only similar to speaking in Tongues.

Ghandour, whose star is steadily rising within the international art community, is increasingly recognized as an young artist of immensely visceral, palpable, and emotional power; an artist possessing of a richly complicated imagination inspired by the environment he’s in.  His profoundly emotional paintings tell rich stories in beautifully abstract, precise detail. His brush strokes, textures and paint drops reveal a man with a deep-layered, emotional condition.

Attempt to dissect an Oussamah Ghandour painting, and be prepared to find yourself teleported into a Super Natural world made up solely and entirely of all 5 senses. In fact, the very essence of the artist’s work – whether painting on canvas or sketches – is indeed the construct and illustration of the 5 human senses, alongside a very crucial secret ingredient, NATURE! This is an artist whose supernatural life’s work has been nurtured completely by the natural.

Born in Lebanon in 1978 during a time of war and upheaval,  Ghandour – who has lived Riyadh, Doha, Nice, Toronto, Beirut, Dubai before eventually settling in New York City – evokes within his paintings, a language influenced by, and is a direct response of, his environment and his life’s journey. Four Ghandour, “every minute counts, and every second is an opportunity gained or wasted”.

Filled with deeply rich, broad, and vibrant strokes of color – sometimes in paint; sometimes of this natural world’s own life forms…bugs, insects – and wrapped around a canvas as if yearning to break barriers and barricades, Ghandour’s defly vibrant paintings sing and dance as if in protest of all borders, all rules. They speak directly of liberation from restrictions, and conventional notions of definition. In fact, his works are “a dedication to the deconstruction of self and the reconstruction of Freedom.”

LIVID Magazine caught up with the rising star artist, who is currently in Paris for a new project, to learn just how nurtured he is by nature:

Can you talk a bit about your background?

I was born in Beirut Lebanon, lived my childhood in Riyadh Saudi and Doha Qatar. My teenage and university life in Toronto, and I studied Fine Arts at York University. I focused most of my studies on painting and was drawn towards expression and collage. After graduating, I studied Graphic Design at the Academy of Design. Soon after I worked as a designer in Toronto, Beirut and Dubai; only to keep getting the itch to focus my time to paintings. After six years in Dubai, I decided to give up the career in a branding world, and dedicate my time to art.

What would you say is your approach as an artist?

My environment is my inspiration. Nature, people! Situations, conversations!

I usually carry a sketchbook everywhere I go. Conversations in my head translate into observational thoughts turned sketches. Sketches turn into ideas and those ideas become paintings. I like to work on two paintings at the same time. This allows me to extract pure expression, one that is subconscious and another that is cerebral. I usually know I’m finished when the image is just about to be defined, ambitious enough where the mind can create multiple stories of the subject matter.

Which other artists inspire you?

There are a lot of artists right now that inspire me on a daily basis. There are really so many talented artists that are all over my social media, and mycircle of friends. But the artists that inspire me the most are the ones that don’t even know what they are creating. Right now my eyes are inspired daily when I see a piece of a sidewalk with crack perfectly creating a silhouette of a women, half a footstep left from wet cement, surrounded with polka dots of stepped on gum. There are pieces like this all over the city. It’s like a collaboration of everything that defines New York. Created by all of us without even knowing,

Is there an artwork you would most like to own?

There is a piece of a sidewalk between Franklin Street and Kent Street in Brooklyn, New York that I would love to have.

Apart from sketches, most of your works is mainly abstract painting. What would you say are the meanings behind, or is the language, behind you abstract works?

The meaning behind the work is hard to place because I’m forever searching for a meaning in everything. But every painting presents more sets of questions. I would like to think that the language of the work is urban poetry borrowed from situations, conversations, existentialist and philosophical questions and observations.

What single item in nature inspires you most?

What influence does nature play in your works?

Most of my work is influenced by nature. It’s not that I leave anything up to chance but I leave room for the environment to determine where the work goes next. Even the environment determines the nature of the work and the materials used around it.

Hence, my documentation of soil, wind, insects!  If I work outside, ill factor in the weather – like wind or rain. The wind can change the direction of the paint, the rain can dilute some of the colors; all this makes me learn more about the pieces created because it takes me away from what I know into the unknown. This way of thinking came to me in 2014 right after my studio in Bushwick was flooded from a rainstorm. My paintings survived but I had a simple series of Ink drawings I’d sketched in Paris in a sketchbook which was sitting in a puddle of water. I carefully peeled one wet page at a time and laid them out all over the studio floor. I came back the next day not knowing what to expect but what I found is that the water added another layer to work. This taught me not to only trust my instincts but also have full trust in the offerings of the Universe.

You grew up in the Middle East during a time of war. What effect has that had on you as an artist?

I was young when I left Lebanon because of the war. After that, as a family, we traveled a lot so I became integrated with many different types of people, cultures and environments. This is probably why I’m fascinated by societal behaviors and environments, which is a core subject in my work.

Your work has been exhibited at some exciting, unconventional venues, including Christie’s, Lebanese Consulate Of Art, White Box Art Centre in New York, Art Love New York, Bushwick Open Studios, and even Botticelli Shoes on Manhattan’s Upper East Side. Where would you like most to see you work exhibited?

Place you would most like to visit and why?

The way people interact with the city by leaving their footprints behind.

Capturing and documenting the cumulative masterpieces that are created by this colorful society.

It would be an incredible silent collaboration.